Madrid is the capital of Spain and the largest municipality in both the Community of Madrid and Spain as a whole. The city has almost 3.2 million inhabitants and a metropolitan area population of approximately 6.5 million. It is the third-largest city in the European Union (EU), smaller than only London and Berlin, and its monocentric metropolitan area is the third-largest in the EU, smaller only than those of London and Paris.

Madrid lies on the River Manzanares in the center of both the country and the Community of Madrid (which comprises the city of Madrid, its conurbation and extended suburbs and villages); this community is bordered by the autonomous communities of Castile and León and Castile-La Mancha. As the capital city of Spain, seat of government, and residence of the Spanish monarch, Madrid is also the political, economic and cultural centre of the country.

The Madrid urban agglomeration has the third-largest GDPin the European Union and its influence in politics, education, entertainment, environment, media, fashion, science, culture, and the arts all contribute to its status as one of the world’s major global cities. Madrid is home to two world-famous football clubs, Real Madrid and Atlético de Madrid. Due to its economic output, high standard of living, and market size, Madrid is considered the leading economic hub of the Iberian Peninsula and of Southern Europe. Madrid is also the 10th most liveable city in the world according to Monocle magazine, in its 2017 index

While Madrid possesses modern infrastructure, it has preserved the look and feel of many of its historic neighborhoods and streets. Its landmarks include the Royal Palace of Madrid; the Royal Theatre with its restored 1850 Opera House; the Buen Retiro Park, founded in 1631; the 19th-century National Library building (founded in 1712) containing some of Spain’s historical archives; a large number of national museums, and the Golden Triangle of Art, located along the Paseo del Prado and comprising three art museums: Prado Museum, the Reina Sofía Museum, a museum of modern art, and the Thyssen-Bornemisza Museum, which complements the holdings of the other two museums. Cibeles Palace and Fountain have become one of the monument symbols of the city.

Use public transportation! Here’s a map that will show you all the bus and subway routes that will take you to the Wanda Metropolitano. 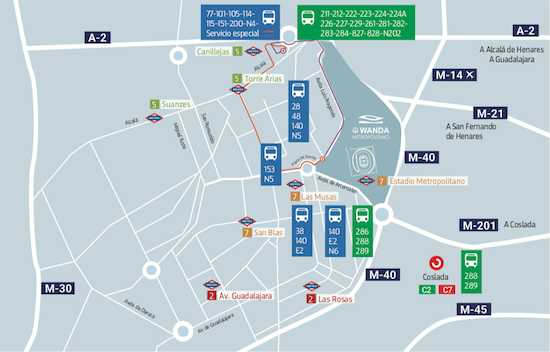 We recommend you use the Madrid subway, since it’s the best way to get to the stadium. The closest subway stop is Lines 7’s ‘Estadio Metropolitano’.
You can also take Line 2 and get off at ‘Las Rosas’ or Line 5 to ‘Canillejas’, both are about 15 minutes walking distance from the stadium. If you’re coming with your car on the M-40, you should exit on Arcentales. The parking lots in the Wanda Metropolitano are strictly for those who reserved a spot. Please don’t show up with a car if you don’t have a parking pass. Closest Parking is Park South.

The capital is connected by air to the main European and American cities, and by road and train to all Spanish cities. The buses and metro run regularly and are highly reliable.

Barajas Airport (with 4 Terminals at different distances from the city centre) is located 15 minutes by light train from the city centre and the two main train stations, Atocha and Chamartín, are situated on both ends of the Castellana. There is also a large taxi fleet, whose prices are also very reasonable. The journey from Barajas airport to the city centre comes to around 30€.

You are also able to reach Madrid by car.

Madrid’s underground system is in fact one of the longest in the world. Madrid public transportation is clean, fast, safe, extensive and efficient.

It includes 13 metro lines, more than 170 bus lines (EMT), 3 tram lines and 10 lines of Cercanias (local trains that link the city centre with the suburbs).

There are also tourist passes for unlimited usage during 1, 2, 3, 5 or 7 days. You can buy single tickets on buses (cash) or at machines in metro stations (cash or c/c). The same 10-trip ticket (available at metro stations) may be used on the metro system and busses. Within the metro system you may change freely between the various lines using the same ticket. However, changing from one bus to another means that you have to pay each time you change. Be aware that the driver will wait until he hears the sound when you punch your ticket.

There is plenty to see and do in Madrid even during the fall since the weather is usually nice and warm. It is a vibrant city with a lively night life and many cultural event all year around. For an active traveller, Madrid offers various possibilities.

*These links are being provided as a convenience and for informational purposes only; they do not constitute an endorsement or an approval by the European Sport Nutrition Society of any of the products, services or opinions of the corporation or organization or individual. ESNS bears no responsibility for the accuracy or content of the external site or for that of subsequent links.